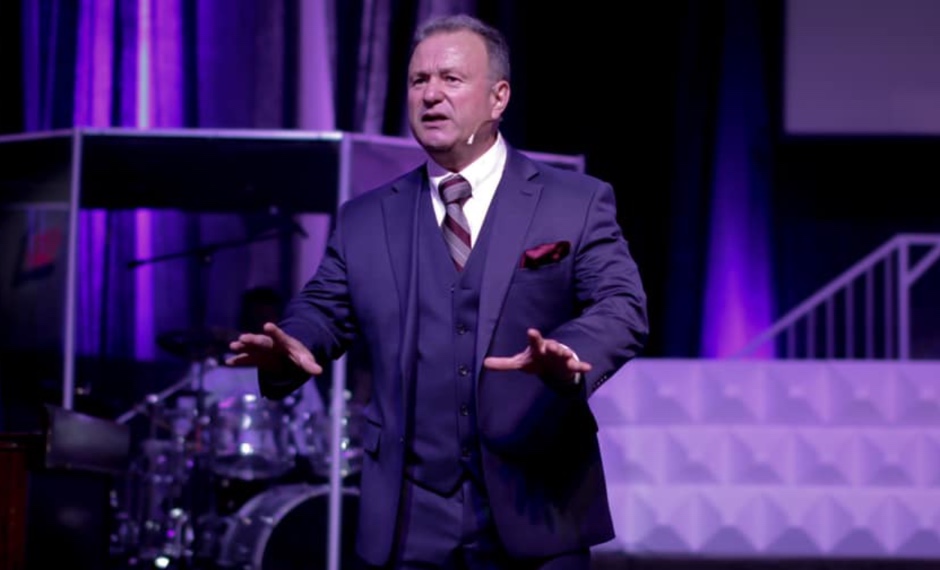 The key to USA is God's Revival

Psalm 85 'Lord, thou hast been favourable unto thy land: thou
hast brought back the captivity of Jacob. 2  Thou hast forgiven the
iniquity of thy people, thou hast covered all their sin. Selah. 3  Thou
hast taken away all thy wrath: thou hast turned thyself from the
fierceness of thine anger. 4  Turn us, O God of our salvation, and
cause thine anger toward us to cease. 5  Wilt thou be angry with us
for ever? wilt thou draw out thine anger to all generations? 6  Wilt
thou not revive us again: that thy people may rejoice in thee?
7  Shew us thy mercy, O LORD, and grant us thy salvation. 8  I will
hear what God the LORD will speak: for he will speak peace unto
his people, and to his saints: but let them not turn again to folly.
9  Surely his salvation is nigh them that fear him; that glory may
dwell in our land. 10  Mercy and truth are met together;
righteousness and peace have kissed each other. 11  Truth shall
spring out of the earth; and righteousness shall look down from
heaven. 12  Yea, the LORD shall give that which is good; and our
land shall yield her increase. 13  Righteousness shall go before him;
and shall set us in the way of his steps.

The Key To USA Is God's Revival
Since the 1960's an evil stain has spread across the land and it has only
increased and magnified – the sin of abortion, the shedding of innocent
blood.. They have 'done much evil in the sight of the Lord' just as King
Manasseh did in the Old Testament. He also introduced evil practices to
Judah, even sacrificing his children to the god Moleck.
'Moreover Manasseh shed very much innocent blood, till he had filled
Jerusalem from one end to another, besides his sin by which he made Judah
sin, in doing evil in the sight of the LORD.' – 2 Kings 21:16

'and also because of the innocent blood that he had shed; for he had filled
Jerusalem with innocent blood, which the LORD would not pardon.' – 2 Kings
24:4
'Also he made his son pass through the fire, practiced soothsaying, used
witchcraft, and consulted spiritists and mediums. He did much evil in the sight
of the LORD, to provoke Him to anger.' – 2 Kings 21:6
This caused God to pronounce a judgment on Judah that they could not
escape. In our country Planned Parenthood has killed 60 million babies and
over 1 billion worldwide.
What is even worse, these actions are supported even by professing
Christians and Ministers or those who claim to be Christians, they promote
this diabolical system of government.
I believe God's judgment is already falling on the United States and the rest of
the world for these stands.
A spirit of death or pestilence has been released and it is highest in the cities
where the most abortions take place. Also we have experienced a rise in
violent storms, epoch fires, earthquakes and mass die-offs in the last
decades.

The passage that we have just read is a heartfelt prayer for
revival. The Psalmist is no doubt thinking back upon the roller
coaster-like spiritual history of Israel. He is remembering how,
after Israel had given into sin time after time, God had always
provided a plan to bring them back to Himself. And with this
thought in mind, his heart cries out to God, "Wilt thou not revive
us again?"
Looking at our own nation, and its present situation, we can
easily see the desperate need for revival. We have seen some
changes in attitude and thought since September 11, 2001, when

our nation was ravaged by those now infamous terrorist attacks
and now in 2020 the Covid-19, civil unrest.
God. America is in desperate need of a God birthed true spiritual
awakening.
The Roman historian, Seneca, once warned the Roman
Empire of its impending collapse.
He was laughed at and ridiculed for his unpopular prediction.
But the collapse came just as he'd predicted. The Roman Empire
exist today only in the pages of history books.
With that in mind I find It  interesting to note the three major
characteristics of the Roman Empire at the time of its collapse:
(1) Religious Apostasy--People had forsaken the God Who had
created them;
(2) Moral Degradation--The people of the Roman Empire were
some of the most vile and lewd people of their day. A human life
was of little worth;
(3) Political Anarchy--The political situation in the Roman Empire
was chaotic. The nation disintegrated, while every man did that
which was right in his own eyes.

Folks, the conditions of our once great nation are strikingly similar
to those of the Roman Empire at the time of its fall. I Believe with
all my heart that the key to America's survival is revival. Our
nation must turn back to God. I stand before you today as a
prophet declaring the same warning as Seneca on the Impending
collapse of America unless the spirit of Joshua is awakened.

With that in thought, America will never see revival until
individual Americans seek God for personal revival, and then
cry out to God in true brokenness for national
revival. Revival must begin with the individual.
The question of the hour is not so much, "What is the spiritual
condition of America?" but, "What is our personal spiritual
condition before God?"
As we think along the line of revival, there are three facts of
which I want to make us aware. We not only need to
understand these facts  we must comprehend and apply
them if America is going to survive as we "The Professing
Body"  seeks God for revival.
1 st   theme: We need to understand...
I. THE OCCURANCE OF REVIVAL
A. True Revival Always Originates with God's Sovereignty.
1. The Psalmist realized that revival was God's doing.
Ps. 85:6a "Wilt thou not revive us again..."
The only way something can be revived is to 1 st  realize it is dead!
2. Habakkuk also realized that revival is something that God must
accomplish.
Hab. 3:2b "...O Lord, revive thy work in the midst of the years, in
the midst of the years make known; in wrath remember mercy."
NOTE: [1] Christians can schedule meetings, invite evangelists,
organize and plan; but we cannot produce revival. Revival has but
one source--God.

[2] Revival is when "...there is an invasion from heaven, and God
intervenes in the life and work of a church."
[3] The matter of revival is not to be taken lightly:
The church desperately needs revival, but it is not going to
come by quick and easy methods.
Evan Roberts prayed for eleven years before the Welsh
Revival broke out, and his ministry during that remarkable
time broke him physically. More than one hundred thousand
people were converted to Christ during that mighty awakening,
but it was not the result of manufactured meetings (they were
spontaneous) This was not the result or manmade promotions.
True revival goes deeper than that.
B. Revival Only Occurs When Saint's Face Their Own Sinfulness.
It's not my brother it's not my sister it's me O-Lord standing in
need of prayer.
NOTE: There can be no real revival apart from facing oneself:
Revival is the heavenly visitation of a Holy God, which brings to
life Christians who have been sleeping and restores a deep sense
of God's near presence and holiness.
This in turn brings a vivid sense of sin and a profound
exercise of heart in repentance, praise, and love, with an
evangelistic outflow.
If you do not have a heartfelt cry and passion for the lost you are
in desperate need of revival.
1.Not only do we live in physically perilous and dangerous times
We also live in spiritually perilous times.
2 Tim. 3:1 "This know also, that in the last days perilous times

shall come. 2 For men shall be lovers of their own selves,
covetous, boasters, proud, blasphemers, disobedient to parents,
unthankful, unholy, 3 Without natural affection, trucebreakers,
false accusers, incontinent, fierce, despisers of those that are
good, 4 Traitors, heady, highminded, lovers of pleasures more
than lovers of God;
5 Having a form of godliness, but denying the power thereof:
from such turn away."
NOTE: [1] We hear these verses read and we automatically think,
"Yeah, that's exactly the condition of our world today." And that's
true. It is the condition of our world today. But it is also true that
many of those traits can be found among God's children as well.
What a sad state of affairs for the church of Jesus Christ.
[2] On the whole, the Church has grown cold, calloused, and
casual about their relationship with God. Many of God's people
have relegated their relationship with God to a very low position
on their list of priorities. God Help us WE NEED REVIVAL!
2. God is speaking to this generation of saints through the
tragedies and calamities of our day.
a. He's saying, "You better Look around."
Deut. 31:17 "Then my anger shall be kindled against them in that
day, and I will forsake them, and I will hide my face from
them, and they shall be devoured, and many evils and troubles
shall befall them; so that they will say in that day, Are not these
evils come upon us, because our God is not among us?"
b. He's saying, "You better Look deep inside."
Isa. 55:6 "Seek ye the Lord while he may be found, call ye upon
him while he is near:

7 Let the wicked forsake his way, and the unrighteous man his
thoughts: and let him return unto the Lord, and he will have mercy
upon him; and to our God, for he will abundantly pardon."
c. He's saying, "You better Look up."

2 Chron. 7:14 "If my people, which are called by my name, shall
humble themselves, and pray, and seek my face, and turn from
their wicked ways; then will I hear from heaven, and will forgive
their sin, and will heal their land."
2 Chron. 15:2c "...if ye seek him, he will be found of you..."

II. THE OPPORTUNITY OF TRUE REVIVAL Lies Only With The
Saints of God.
1. Only saints can be revived.
Ps. 85:6a "Wilt thou not revive us again..."
2 Chron. 7:14a "If my people, which are called by my name, shall
humble themselves..."
2. Revival is not lost souls getting redeemed, but saints
getting right.
a. In Jonah chapter 2, Jonah repented and Jonah was revived.
b. In Jonah chapter 3, the Ninevites repented and the Ninevites
were redeemed.